I just got back from a trip to Canada. While in Canada I went to the Canadian Archives in Ottawa to finish up my research on the family line of Catudals from Canada. I discovered a number of new things. I'm keeping mum on most of them until after I have publish my book. I want to be the first to present some, before unknown, interesting facts about some of our extended family.

In my last posting I talked about Narcisse Avila Ferdinand Horace Catudal from Québec who was one of two Catudals to have fought in WWI. When at the Archives I looked at the WWI records which documented his involvement in the war. Well, was I surprised to find out that Horace didn't actually see battle in WWI.

Horace enlisted on 12 July 1918. He was called into service on 11 March 1919 but didn't report for duty. Here is the form showing that he was declared a deserter. 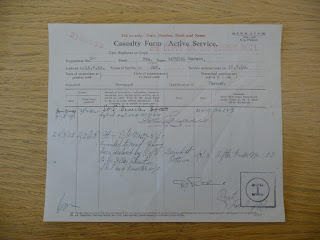 He was paid for one month's service even though he didn't show. Here is the record of his last first and last pay: 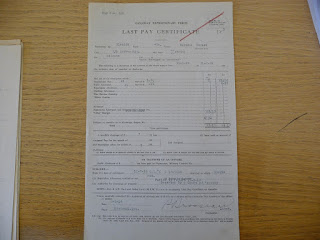 Horace married on 8 September 1920 and had three children. I do not have any evidence that he was prosecuted for his desertion though.
Posted by Judy Schneider at 16:01