Here are some more old photos I found in some of the old Catudal photo albums that were passed down to me.
These two were taken about 11 to 13 years apart: 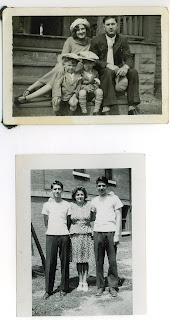 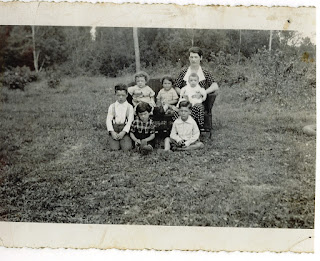 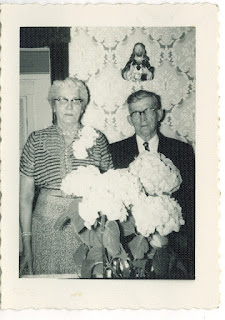 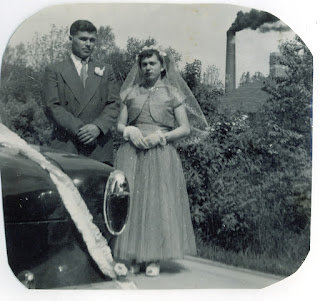 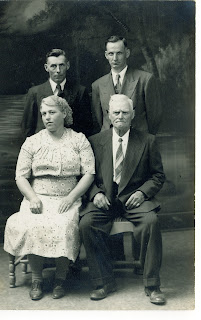 Stamped on the back of this photo is "J. A. Légaré Studio Jun 12 1948 Waterloo, Qué."
Thanks to my cousin Laurie Catudal Campbell for helping to identify the people in this picture. She showed this picture to her aunt Margeurite  who was able to identify the lady in this photo as being Lucie-Anne Catudal. I really should have noticed this but was thrown-off because Lucie-Anne had a dark birth mark on the upper side of her mouth on her right side. In this picture as in some others she is using a concealer to cover the mark and she is turning her face so that the mark isn't as visible.
Margeurite's mother, Cecile, was the sister of Lucie-Anne's husband, Camille.
Lucie-Anne married Camille Robidoux in 1924. It was a double wedding with Lucie-Anne's brother Magloire marrying Camille's sister Cecilia (Cecile) Robidoux. Margeurite believes that the man sitting next to Lucie-Anne may be the father of Camille and Cecile and the two men standing behind may be the older man's sons. The one standing behind Lucie-Anne may be her husband Camille. I'll have to go through my grandmother's photo albums to see if I can find a picture of Camille as an older man to confirm my suspicion. A big thank you to Laurie for having taken the time to help try and find out who the people in this picture were!
Please leave a comment if you know any of the people in these pictures or e-mail me at judy@catudals.com
Posted by Judy Schneider at 11:42 4 comments:

The Filles à Marier were 262 women who, between 1634 and 1663, came to Canada looking to find a husband. These women were the fore-runners of the Fille du Roi. The Filles à Marier, unlike the Fille du Roi, were not solicited by the King, nor given any dowry by the state in order to come to New France. Merchants, seigneurs and private religious groups recruited the young girls and women.

Recently a cousin of mine, Susan Cole, let me know about a new book entitled Bride of New France by Suzanne Desrochers. This book is a fictional account based on fact about two girls who came over to New France as Fille du Roi.

Spoiler - if you plan on reading the book Bride of New France then skip the next two paragraphs and head right for the last paragraph.


One dies shortly after arriving; the other goes on to experience the harsh realties of what awaited the women who came over during this time. The Fille du Roi came over from 1663 to 1673. The crossing these girls made is set in 1669. The author states that she was inspired to use one person in particular to tell the story of the girl who came over to New France but died shortly there-after. Her name was Madeleine Fabrècque. Madeleine wasn't actually a Fille du Roi in real life but rather a Fille à Marier and made the crossing not in 1669 but 10 years before arriving in Montéal late in 1659.

Why do I mention this? When I saw the name Madeleine Fabrècque I recognized the name. When writing my first book I wrote about this particular girl, Madeleine Fabrècque, and how she had died shortly after making the crossing. I was particularly interested in her not because we as Catudals were related to her but rather because an inventory of her belongings had been made. It is very rare to find an inventory of one of the Fille du Marier. As we have a number of Fille du Marier, all without any information on what they brought over with them, I had used Madeleine as an example of what types of things our fore-mothers may have brought over as well.  The second reason I mention it here is that there were 4 girls who traveled together on that particular ship and they were Madeleine Fabrècque, Isabel Camus, Maruerite Rebours and Marguerite Maclin. If you are related to either Bethelemy Catudal (1864-1937), Pierre Philibert Catudal (1867-1929) or Magloire Arthur Catudal (1879-1934) then you are related to Marguerite Maclin.

The book Bride of New France is a very good book to read if you are interested in learning what life in France was like in the 1660's, what the crossing from France to New France was like and what life was like in New France during the same time-frame. I have studied the history of New France for many years as part of my ongoing research into Catudal family history and can say that this book is very accurate in detail. It takes the hard facts and weaves them into a fictional narrative that makes you feel like you are right there. Thank you Susan for having let me know about this book!
Posted by Judy Schneider at 13:21 3 comments:

My cousin Anne-Marie St-Jean wrote to me to let me know that there was one another Catudal who saw battle in WWII and that was Armand Donat Lucien Catudal (1919-1997) who served as a captian in the Royal 22e Regiment in WWII. I had added that information to my book but had not added it here. Anne-Marie sent along several pictures of Donat and of his headstone. She was able to identify a picture from my last post as being of Donat Catudal. Please view my last post to see the whole picture. A big thank you Anne-Marie!
Here they are: Please click on pictures to enlarge 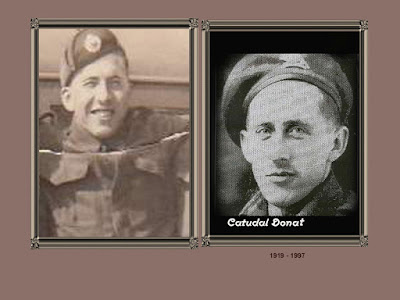 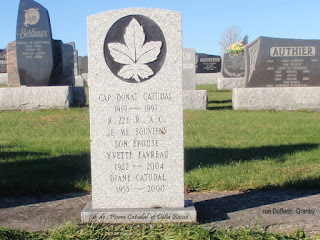