The update is written in red below

Have you heard of the British Home Children? It seems to be one of the very best open secrets of the 19th and 20th centuries. It was a scheme devised to alleviate the financial burden on Britain of its poor or impoverished children. Rather than look after their own, they sent poor children whether orphaned or not to their colonies of Australia, Canada, New Zealand and South Africa in the form of cheap child labour.

There were a number of organizations responsible for the emigration (read deportation) such as: Barnardo’s, Annie Macpherson, Maria Rye, Fegan Homes, Dr. Stephenson, the National Children’s Home and so on

There were well in excess of 100,000 children taken from Great Britain between 1833 and 1939. Their ages usually ranged between 6 and 15 years of age but some were as young as 3 and they were simply known as “The Home Children”

Often the agencies responsible for these “Waifs and Strays” changed dates of birth and last names of the children so that they could never trace where they themselves came from. It is as if they were simply thrown away not even with the dignity of a past or identity to hold onto.

This wasn’t the only time that Britain engaged in this practice but it was the last.

The majority of the children were sent to Canada. They were set-up on farms as indentured servants working until the age of 18 without pay or the right to medical care and they were not allowed to go to school.

As part of my research for my book, The Families Catudal. I came across a 1911 census that struck me as kind of odd.

Under the entry of Barthelemy Catudal’s family was an “adopted” daughter name Sara (sic) Clarke. The entry noted that she was 17 years of age and had come to Canada in 1904 at the age of 10 at which time, presumably, she had gone to live with Barthelemy’s family. What was strange is that I never heard of her at all - Barthelemy was my great grandfather. My grandfather would have been 11 years old at the time of the 1911 census and old enough to have remembered her but he nor my great aunts and uncles never once mentioned her. I tried to find out what had become of her but could never find any information on her, until recently.

Also of note in the above census is the fact that all of the school aged children were shown to have attended 10 months of school for the year 1910 but not Sarah. As I said, the British Home Children were not allowed to go to school; they were on these farms to work, period.

I managed to find Sarah on a passenger list along with 75 other children on the ship The Bremen. They had set sail from Liverpool, England on 18 February 1904 and had arrived in Halifax on the 27th. One child was being sent on to Sturgeon Falls, Ontario another to Barrie, Ontario and the rest were all headed to Knowlton, Québec from whence they would be distributed to various farms in Québec as child labourers. 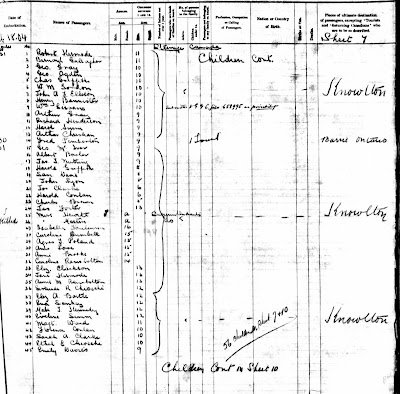 I was really dumbfounded when I saw her name on a passenger list carrying so many children sailing all alone. It occurred to me that she and the rest must have something to do with The Home Children and started to look deeper into this often times horrible legacy. This is when I came into contact with Perry Snow who’s own father had been one of these outcasts. He has spent many years developing a comprehensive database of British Home Children: the database has over 57,000 British Home Children records, in order to make sure that these children would not be forgotten, to show that they mattered, that they were someone and so that their names would live on.

I submitted Sarah Ann Clarke’s name to Mr. Snow to be entered into his database, along with the vital record details I have to date uncovered such as, her entry on the Passenger List from 1904, the 1911 Census, her marriage record, the 1920 USA Census entry and the 1930 USA Census entry. Sarah now will live on. She did exist and she did matter!

A little bit about Sarah: She was a Methodist and was married on 29 October 1915 in the Lawrenceville Methodist Church. At the time of her marriage she had been living in Bedford Village. Her husband, Alex J. Bresette, who was a fair bit older than she, had been living in South Durham prior to their marriage. On the 1920 Oxford, Maine census it states that she and her husband had moved to the States in 1915 (shortly after their marriage), that they were not American Citizens and that Sarah came from the coastal town of Margate, England, about 75 miles Southeast from London. It was a stroke of luck that the enumerator had entered the town rather than just England. He had struck out the town’s name and left the word England on that line but it is clear to see the name below the crossed out line.

The Census also shows that both Sarah and her husband could read and write but neither had attended school. They owned their own home but it had a mortgage.

On the 1930 Census it shows that the couple had moved about 10 miles away from where they had lived in 1920 to Mechanic Falls, Maine and that they no longer owned their own home but rather rented for $16.00 a month. This time they stated that they had immigrated not in 1915 but rather in 1924 and were still not American Citizens. Alex did odd job while Sarah kept house.

Sarah and her husband do not appear to have had any children.

I have yet to be able to find more on Sarah but will continue to search. Well, perseverance does pay off. Today I found Sarah's death information as well as her husband's. After having lived all those years in Maine, she and her husband moved back to the same town where she had been 'placed' in 1904. She died on 17 December 1949 in Sherbrooke, Québec, Canada. He death record, which I found through Généalogie Québec - Institut généalogique Drouin, had her birth date as having been 3 July 1891.

Her husband Alexander John Bresette died on 3 April 1957 in Montréal, Québec, Canada. I'm so please that we now know where she is. Now, I will try to find her grave marker, if there was one and if it survived...

Now that I have a possible town where she was born and know that she and her husband probably lived out their lives in Maine I am sure that I will be able to put together a more complete picture of this, until now, forgotten soul.

If ever you would like to know more about the British Home Children then I highly recommend Perry Snow’s book Neither Waif nor Stray which can also be purchased as a PDF book. It chronicles his father’s search for his identity only to be met with brink walls at every turn. After Perry’s father’s death, Perry began a mission to put to rest, once and for all, the question his father so much wished and had tried to have answered in his lifetime and that was “who am I”. Perry’s father, Frederick George Snow (1909-1994), would have been so proud of his son if he could have seen what Perry discovered. As I read Perry’s book I could see that the passion he had that sustained him through the stonewalling and incompetence of the ‘system’ was turning into not only a quest to solve the riddles about his father and where he came from but had broadened to include all such souls. The quest became one of making sure that all BHC would find their rightful place in history, Sarah Ann Clarke being one of them.

Perry writes on page 8 and 9 about what it felt like for someone who fell under the umbrella of the Home Children:

If I asked you to identify yourself, how would you answer? Invariably, you would volunteer your name. Although many others might have the same name, it is the first step in identifying yourself apart from others. Next, you might tell me your date of birth, because although many others might have an identical name, few others would have been born on the same day. Then you might tell me your Parents’ names. Many others might have your name. A few might have been born on the
same day, but no one -- apart from your siblings -- could have your Parents. You can only have one biological Father and Mother, and your moment of birth is unique to you alone. You might then specify where you were born. No one else on earth could have been born with your name, to your Parents, at a specific time, and in a specific place. You
might produce a Birth Certificate to validate your claim to be who you say you are.