Have you ever wondered what life was like in New France in the early days of colonization? Well there is a movie which gives an excellent depiction of life in New France circa the 1630s and 1640s, The Black Robe Screenplay by Brian Moor (Canadain Author), Directed by Bruce Beresford (1991).

There is a book by Suzanne Desrochers entitled Bride of New France which takes the reader on a journey by a couple of women from France to New France in the mid 1600s. It is a work of fiction based on fact and an excellent read.

The film The Last of the Mohicans, which is set in and around 1757 during the French and Indian War, is an excellent look at what life was like at that time as well as a true to life account of that war.

Another source that can give you an accurate, albeit biased, look at life during the early days of New France is the Jesuit Relations - also known as The Relations des Jesuites de la Nouvelle-France. These documents where written by the Jesuit missionaries starting in 1611 and were basically reports which the Jesuits sent back to France telling of the conditions and concerns of New France. These documents span almost 200 years. You can see these documents by going to http://puffin.creighton.edu/jesuit/relations/

Another avenue is to look at the art work done at the time. For the 1600s there is only one Canadian work of art that I was able to find and that is Lady with a Dog from around 1679 (unknown Québec Artist): 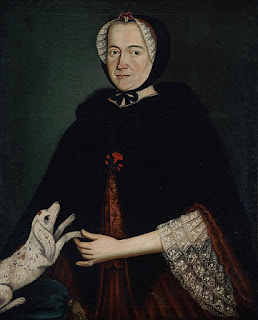 However, if you look at French painters from the 1600s I would bet that most of the styles of clothing worn then were similar to what was seen in New France. Also the furniture and food would have been somewhat similar. If you go to the National Gallery of Canada's Search page at http://www.gallery.ca/en/see/collections/search.php and search for French Artists with a date of between 1600 and 1699 you'll see many paintings created by French Artists during that time-frame. In this way you can also get a glimpse into what life looked like during the early days of New France.
Posted by Judy Schneider at 12:04